Quick question.
When you test the car on the highway and that you got more than 230km, did you had the HVAC ON???
What was the settings on the HVAC?

My fuel economy figures are below. This is without trying to be efficient. At a recent Jeju EV rally, the winning Ioniq EV had a fuel economy of 12km/kWh. Not all driver's will be so fortunate with the weather. Also many of them will not have driven an EV before. Here are some photos from the exact same car I drove being tested by a different blogger. He reviews cars, he is not an EV driver. --- http://blog.naver.com/ubin1024/220840418248 The odometer here is only two hundred km after my trip. How this driver managed to get 5.6km/kWh I don't know.
13C isn't that cold, but perhaps he needed full heating. And obviously it's night-time and raining. He drove a bit better the next day 8.4km/kWh, but was unlucky to get a flat tire. by goncalo
This is important.

I live in montreal, Canada.
During winter, temperature can get really cold (around -20C during daytime and sometime -25 during night)

How does the Kia Soul handles it? How much it looses?
What do you think about the Ioniq?

by JejuSoul
Hyundai seems to be following Kia's lead and sending most of their EV's to Norway. The first Ioniq EVs in Norway have already been delivered. I expect there to be plenty of cold weather testing in Norway that would be comparable to temperatures and conditions in Quebec. I will post some links when I see them.

In the meantime here is an interesting Ioniq advertisement from Germany.

by JejuSoul
First user data from Norway is now available.

AppleKnocker, member of the elbilforum.no Norwegian EV community, tested the highway range of three different electric cars at 120 km/h constant speed. The outside temperature was 3º C, the climate system was set to 22º C and the road was practically flat.

The results he got are not surprising, but very interesting.

by goncalo
Yes, I saw it yesterday.

Interesting.
It would be nice from that person to run different types of test.
Like 100km/h, 110km/hr and 120km/hr (already done).

Hope to get more results as temperature drop in the next few weeks!!!

by JejuSoul
Here's a google translate from a Norwegian forum.
Long drive (256 kilometres) over snowy mountain roads (Two short stops to fast charge). Energy consumption of 13.8 kWh / 100 km.
Doesn't mention the speed, but even so this is impressive mileage when it is snowing.

First winter tour with IONIQ
It was a long trip already the first day (Friday, 4/11/16) We had planned a trip to some friends in Olden this weekend for a while ago. For the lady car was a birthday gift and surprise .. we had borrowed Mercedes to her daughter when our old Leaf 2011 model is excluded for such a long trip (also summer ..) I said we had to go through a dealership and pick the new charging cable I had ordered. When I showed the new charging cable she exclaimed that this suits the not to our car !! No, I said but it fits the over there .. happy new car

no skepticism to drive the 261 kilometers from Mobile to Bergen Vangberg in Olden from his wife's side! It rained and was 4.2 degrees at the start. Did not checked whether battering was 100% charged before departure but guess what. GOM showed 210 km when the car ran out of the store and had about room temperature. The battery pack was enough not substantially heated because it only had been indoors for a few hours. Kupe Temp set at 22 degrees when we drove off.
Rain went over to snow when we approach Romarheim and Matre on E39. On Oppedal ferry dock was only 5 min charging on quick charger before we had hurried onto the ferry to Lavik. Did not listed number KW charged but remember GOM rose to 122 km. Noted that GOM voiced astoundingly good with running distance until now!
Across the Sognefjord weather was better with dry road the first twenty miles but later wetter way toward descent to Forde. On Green contact their quick charger stood there for a Tesla and charged, he had also come from Bergen and should at the cottage. When he heard I was going to Olden and had come from Bergen with DEN car ... connected him off and gave me access. He took one look at the car and was very impressed both with regard to overall appearance and performance (range). We shopped and took a lavatory. It was suddenly 20min charging and 15 KW into the battery. More than enough for the remaining 102 km to Olden. There were varying conditions with dry path along Jølstravatnet but snowy roads over Utvik mountain (600 m). GOM showed about 80km remaining on arrival Vangberg in Olden. History in the car displays 256 kilometers driven by consumption of 13.8 kWh / 100 km.

The car behaved very nicely but it was partly a little nasty feeling when LKAS engaged on the smooth sections. It could be confused with a lack of grip. I connected therefore this out when we drove on slippery sections. A fantastic car for long distances even though we have not gotten into all the technical aspects of the car yet. This is a quantum leap for safety, performance and range against our old Nissan Leaf 2011. The struggling argument those who believe that no such car can be used in the long run !!

I follow up with a more detailed technical documentation return to Sotra west of Bergen on Sunday. Publish the Sunday night or Monday.

by goncalo
Thanks for this review!!

Anything new on your side from others tes range in cold countries??
Thanks again

I think the blue Ioniq EV looks really great. His smile when he realises that the Ioniq does lane keeping is hilarious. I was also cheered up when he said that anyone who could drive this car 175 miles was a genius.
One disappointment is that Robert Llewellyn doesn't do any research or even try to understand some of the easier technical aspects of the cars he is talking about. In comparing the 30kWh Nissan Leaf with a 28kWh Ioniq EV he assumes the leaf has the bigger battery. This is a common mistake made by ordinary users, but Robert Llewellyn should know better. He should be able to explain the difference between total capacity and usable capacity, and state that some manufacturers advertise using the total and some the usable.

by JejuSoul
A possible problem has been reported with the Ioniq EV. - "On a very steep curved turn on rough surface the IONIQ slips and fails to make the turn." 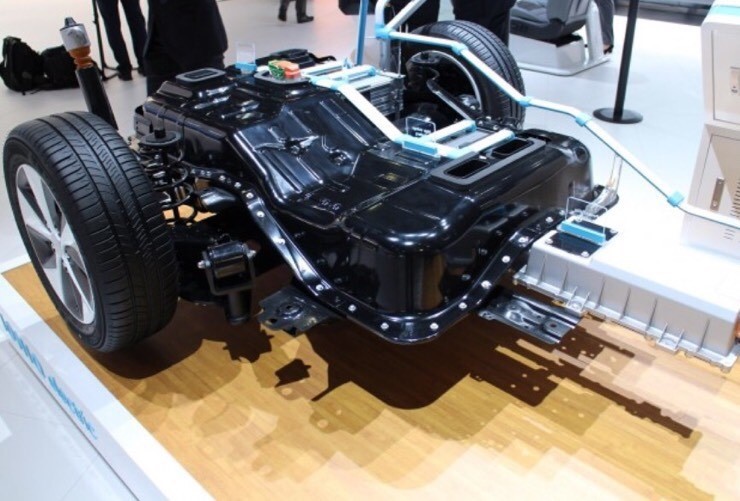 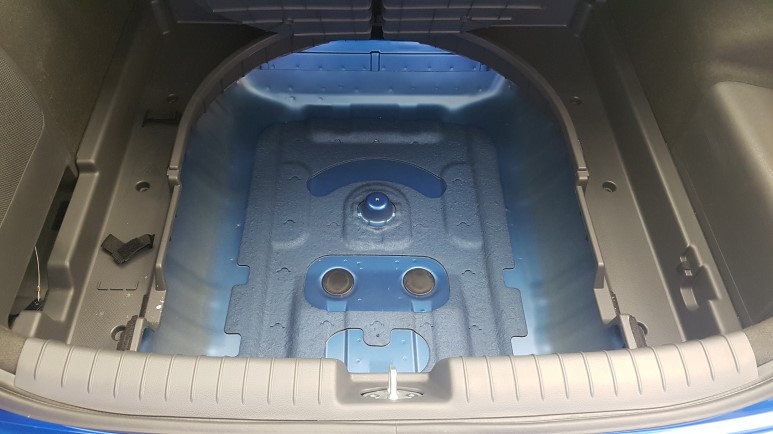 And here the Ioniq EV. Note how the battery pack takes up so much space. The silver pipe leading to the side is the outlet air duct for the battery cooling fan. 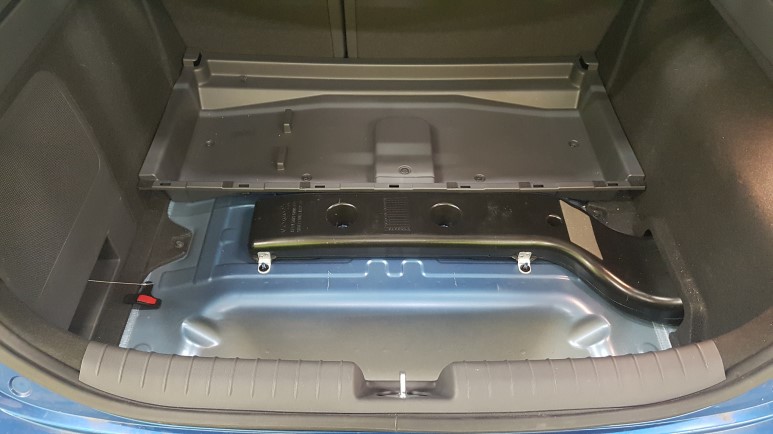 On a very steep curved turn on rough surface the IONIQ slips and fails to make the turn. It is assumed this is something to do with traction control and that the battery pack for the IONIQ is at the back, making the car back heavy. Hyundai has been investigating this issue from last week. two different users reported this issue. "It's originated from weight distribution and traction control is working for unexpected situation. it makes car inoperable in curved uphill."
A video of a car failing to make the turn.